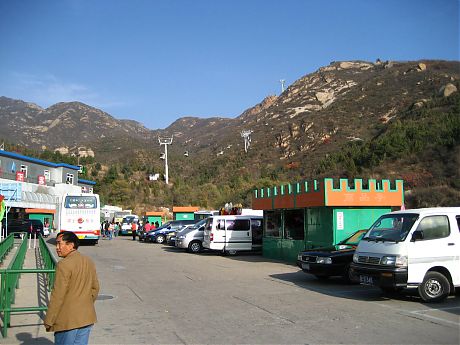 The Great Wall of China has always been a huge draw for tourists, both Chinese and foreigners. The parking lots are almost always full, and there are big crowds at this entrance outside of Beijing almost year round. These pictures were taken in September, again by Bill in 2007. 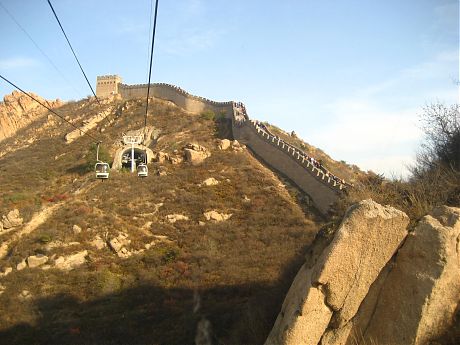 You can either walk up or take a cable car to a higher spot. 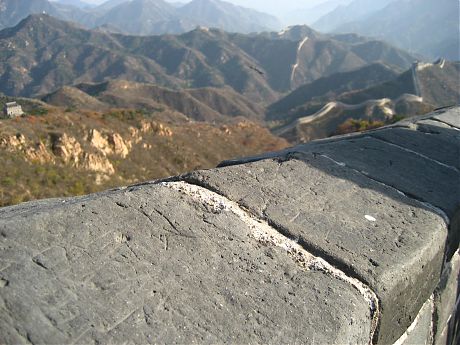 The views are amazing—-even more so when you think of the fact that these walls were put in place to keep out invaders from the North, and are built right along the ridges of the mountains that divide China from what is now Inner Mongolia. 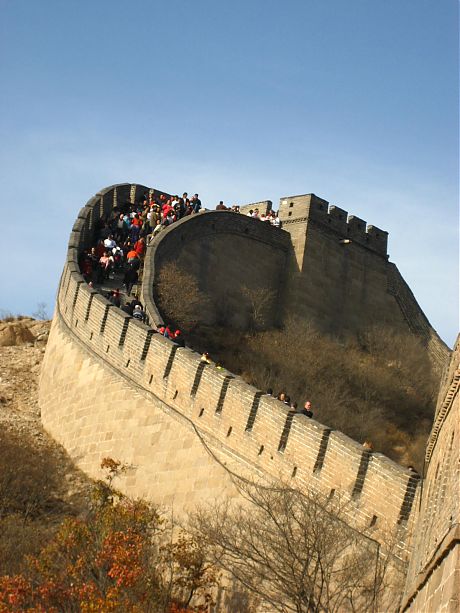 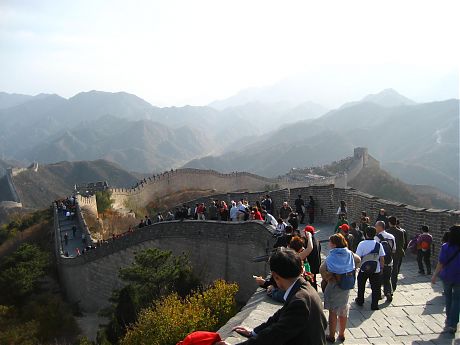 When I visited years ago, I remember it was almost hot at the bottom but by the time we reached our highest point it was very, very cold and we were walking through clouds. 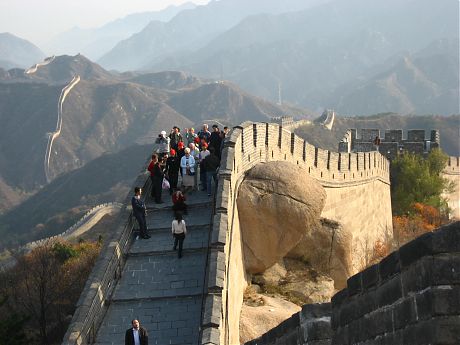 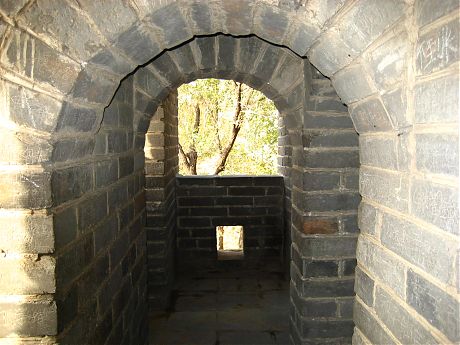 These arches just beg to be filled up and happen to be nearly the right size for a man to stand up straight inside. 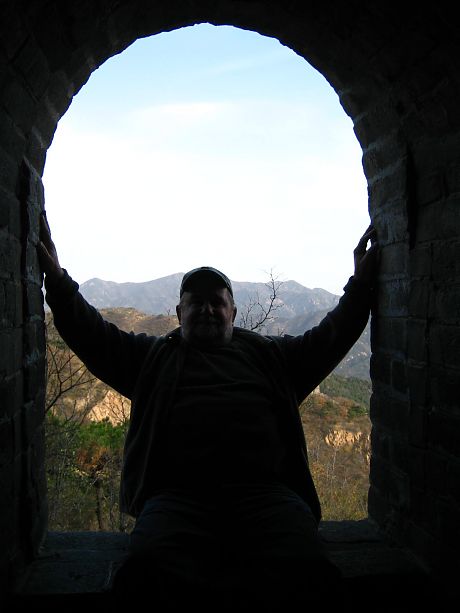 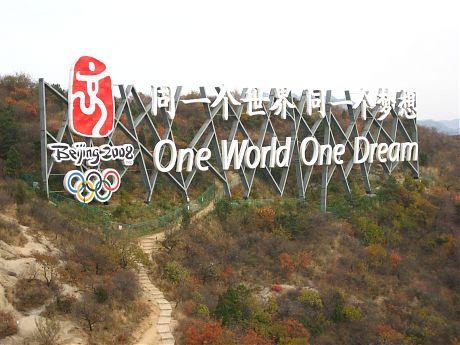 Billboards advertising the upcoming Olympic Games were displayed with great pride everywhere for at least 2 years—Bill shot this picture in 2007 and we saw it everywhere again in 2008.

Yunnan Province is known as China’s most beautiful province, with landscapes that are dramatic and widely various. The snow capped Himalayas contrast with deep gorges carved out by rivers so fast and deep as to be unnavigable, along with placid lakes and acres of terraced rice fields. 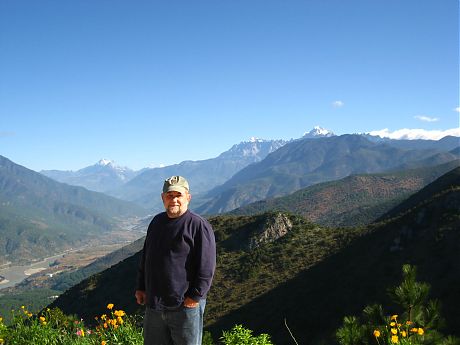 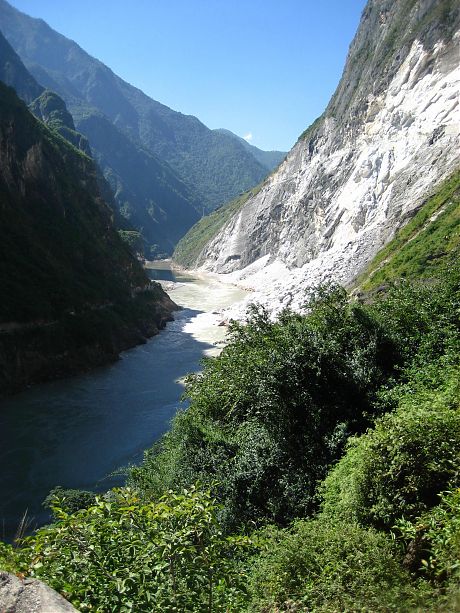 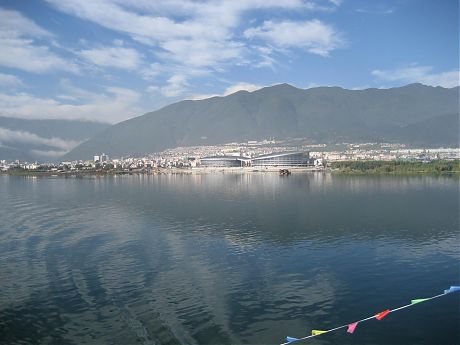 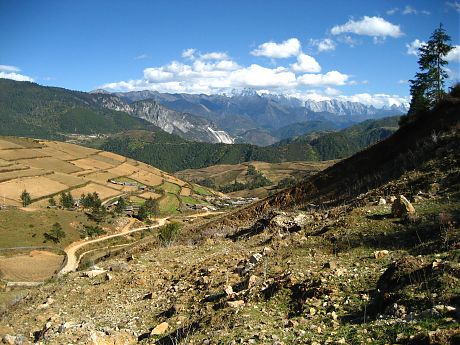 The inhabitants of Yunnan are also varied—fully half of the officially recognized ethnic groups of China make their homes in this warm Southern Province, as well as half of all of China’s plant and animal species. 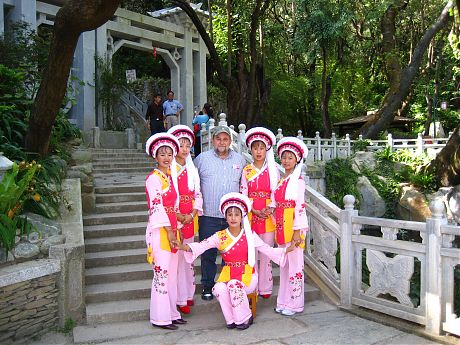 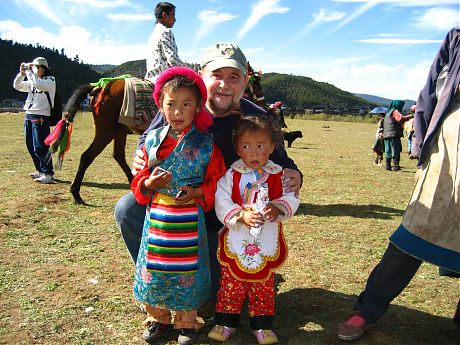 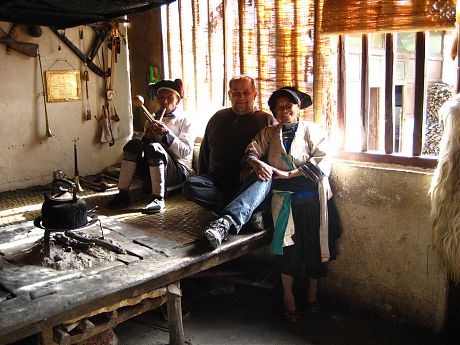 Seeing all the different traditional homes and native dress, while meeting many beautiful, friendly people made a memorable “side trip” during Bill and Hal’s buying trip in the fall of 2006. It was Bill’s first trip to China and he took some amazing photos, only some of which you find here. 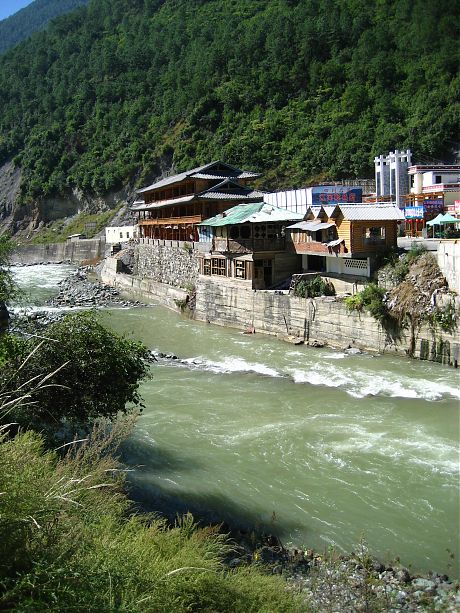 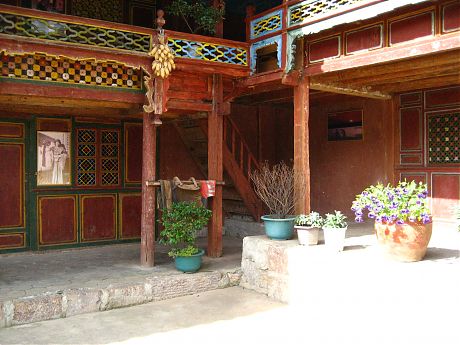 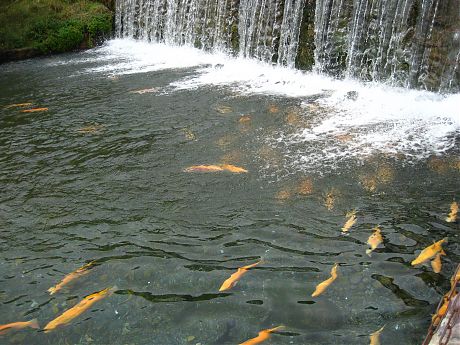 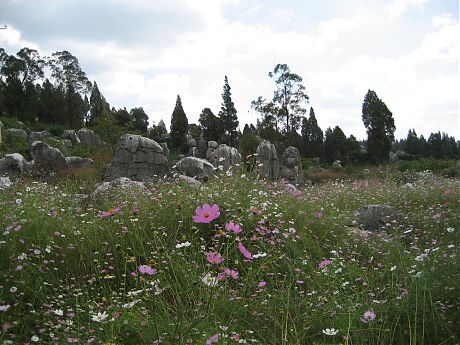 Food is one of the big issues we always encounter when traveling in China. This is Mongolian food—-we ate a goat.There is a lot of ritual surrounding the eating of the goat—- 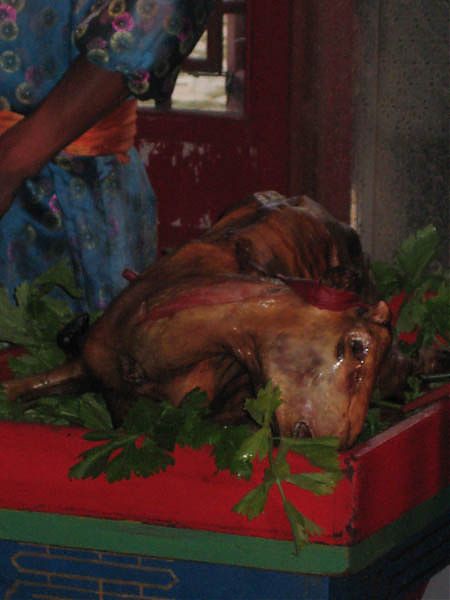 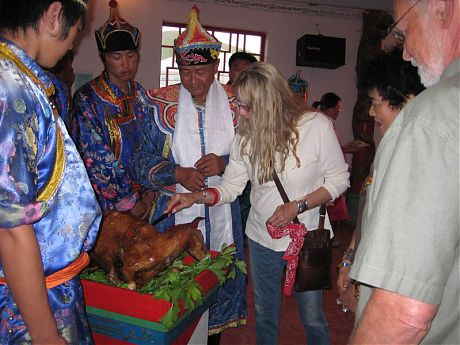 At this particular restaurant, we were treated to dancing, singing and lots of different liquor, including airak, which is (I think) fermented mare’s milk. 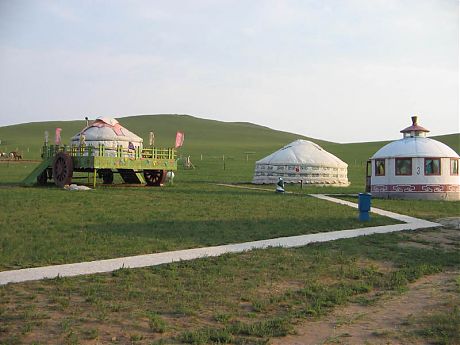 These young men were not only handsome, but also very talented dancers. 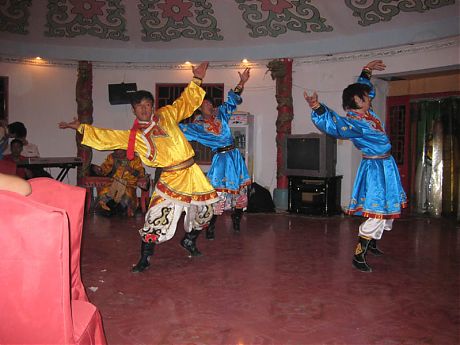 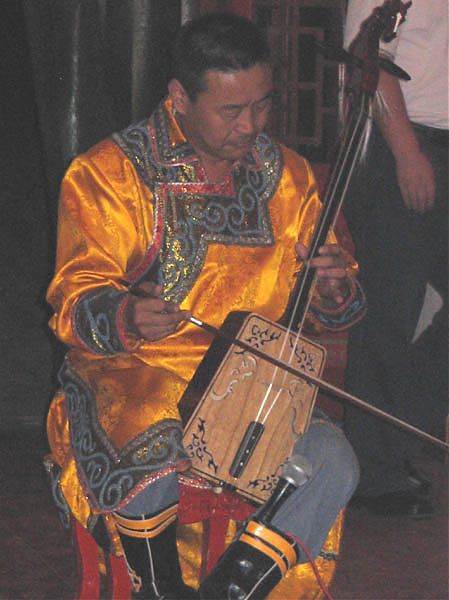 One gentleman played traditional music for us on his 2-stringed instrument, then another demonstrated traditional Mongolian throat singing and finally, a young rock and roll star sang popular tunes. It was altogether a great time!

Below please find some of my favorite pictures of the amazing landscapes of Inner Mongolia. The sky was just HUGE and very much a presence, very changeable and moody. The weather would change in a split second. 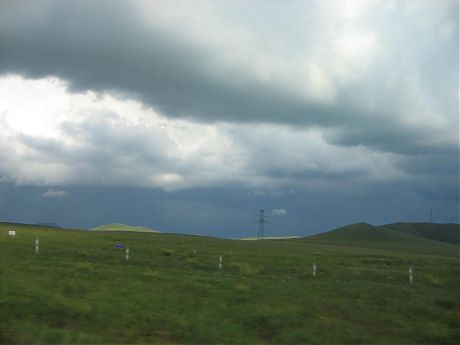 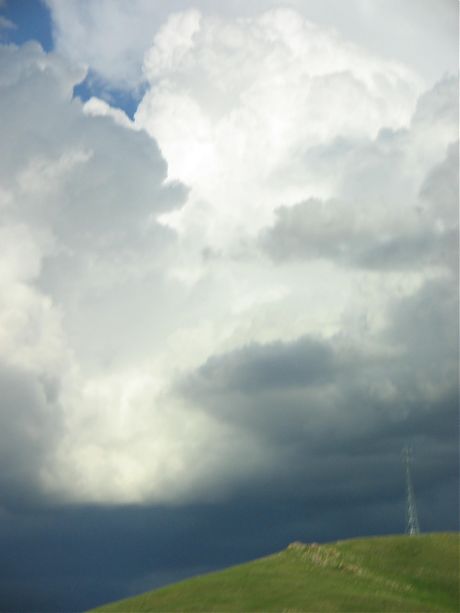 One thing I did not notice until I got home was the cell phone towers in the background of virtually every picture—-so you have this huge, wide open space where you see many more animals than humans, completely wired for sound. It was not at all unusual to see a lone teenager on a motorbike herding a flock of sheep or goats, with a cell phone pressed to his ear. 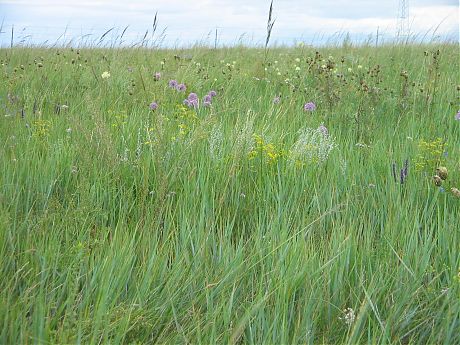 Even though we passed through at least 3 distinct ecosystems the majority of what we saw was endless rolling grassland, often full of tiny colorful wildflowers. Because there was just NOTHING for hundreds of miles, whenever fatigue set in we pulled over into the grass to stretch our legs, take pictures and pick flowers.
Finally I would be remiss if I did not include at least one sunset, typical of the evenings in September. This was taken at the restaurant as well, as night fell. 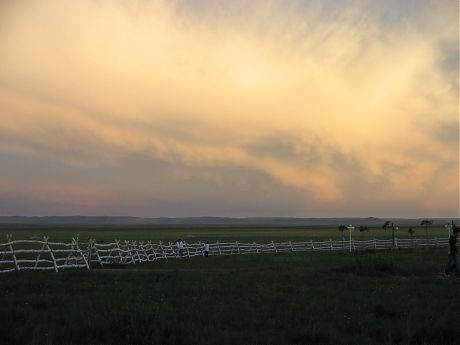